The Shofar is a trumpet made of an animal's horn, but unlike a trumpet, the shofar has no mouthpiece. 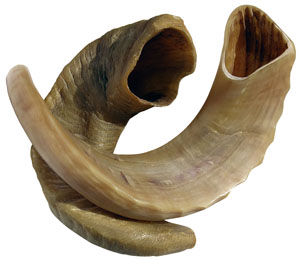 The Shofar is preferably made of a bent Ram's horn (for a Ram's Horn Shofar), but it can also be made from the horns of other Kosher animals, including those of a goat or sheep. A cow or calf's horn is not acceptable for a Kosher Shofar, nor are the antlers of a deer or similar animals who's horns are a solid piece, though theoretically, the horn can come from a non-kosher animal based on the principle of mutar beficha (the material is acceptable for putting in the mouth). There is no requirement for ritual slaughter (shechitah) for the Shofar to be Kosher. It also may not be constructed of an artificial instrument - it must be an instrument in its natural form and naturally hollow.

Sounds of the Shofar

There are three sounds made with the shofar:

The significance of the Shofar 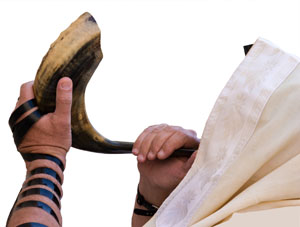 The sound of the shofar arouses our souls to repentance. We blow the shofar to show that we accept God as our king, as it says in Tehillim (Psalms) 98:6, "With trumpets and the sound of the Shofar make a call out before the King, God".

In Biblical times the shofar was blown to announce an important event, such as the alarm of war, to announce the New Moon or to announce holidays. The blast of a Shofar emanating from the thick cloud on Mount Sinai made the Israelites tremble in awe (Exodus) 19:16, "And it came to pass on the third day in the morning, that there was thunder and lightning, and a thick cloud upon the mount, and the voice of the Shofar extremely loud; so that all the people that were in the camp trembled." Thus when we hear the Shofar we are reminded to strengthen our commitment to the Torah.

The Torah describes the first day of the seventh month (Rosh Hashanah) as a zikron teruah (memorial of blowing) and as a yom teru'ah (day of blowing). This was interpreted by the Jewish sages as referring to the sounding the shofar.

The Shofar also reminds us of the ram God brought to Abraham just as he tied down his son Isaac in preparation for the ultimate sacrifice.

Want to talk about Shofar?