The Chuppah is the most universally recognized symbol of a Jewish wedding. The Chuppah is a structure under which the ceremony takes place. It is generally consisting of a cloth canopy, sometimes a Tallit, beneath which the bride (Kallah) and groom (Chatan) stand. 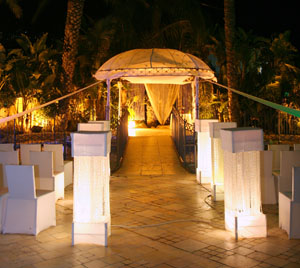 The Chuppah is usually held up by four poles, or sometimes manually held up by attendants to the ceremony. It represents the presence of God as well as the couple's future home. It also serves as a sanctified place where the bride and groom's vows can be exchanged. The Chuppah is open on four sides, as to invite the community to share in the joy of the wedding. Just as a chuppah is open on all four sides, so was the tent of Abraham open for hospitality.

Want to talk about Chuppah?