The Dead Sea is situated in the center of the Syrian-African fault in Israel. It isthe lowest point on dry land in the world (417 beneath sea level). Another record theDead Sea holds, is having the highest salt concentration of any of the world seasor Salt Lakes.

The high salinity of the waters in the Dead Sea prevents the existance of life in the water, hence its name.

Dead Sea Salts are know for their high mineral content and for their healing qualities.Not only does the Dead Sea have a higher overall concentration of salt, but certainelements, such as Potassium, Magnesium, Calcium and Bromine are all present in much higherquantities in the Dead Sea than in sea water. 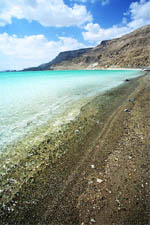 Dead Sea minerals can be used as is or they can be custom scented, colored or blended withfragrance oils and essential oils.

Dead Sea Minerals are today available around the world under then name Ahava Cosmetics.

Therapeutic treatments using the natural ingredients indigenous to the Dead Sea are asynergy of minerals, salts, mud and water, as well as the region's unique atmosphericconditions. The Dead Sea region is recognized worldwide for its efficacy in the treatment of a wide rangeof dermatological diseases, rheumatic ailments and respiratory disorders. Moreover, individualssuffering from hypertension, and muscular or vascular inflammation, will find the stress-freetreatments available in the numerous spas along the Dead Sea's magical shores to be of distincttherapeutic value.

Scientifically proven to be remarkably effective in curing people of allages with various conditions, these treatments are administered successfully withvirtually no side effects.