Content [ Hide ]
Five Grains
How to make a Matzah

Throughout the period of Passover, only unleavened bread (or in Hebrew - Matzah) may be eaten, in memory of the fact that the Jews, hastening from Egypt, had no time to leaven their bread.

Matzah Shmura ("watched") is a special type of Matzah which is made from grain that has been under special supervision from the time it was harvested to ensure that it was completely protected of water and moisture since its harvest.

For Passover, the ingredients for the preperation of the Matzah are flour and water. Only five grains may be dry-roasted and used in the preperation of the Matzah (during Passover, these grains may not be used for any other purpose in any processed form): wheat, barley, spelt (correctly, emmer wheat), rye, and either oats (according to Rashi) or two-rowed barley (according to Rambam's interpretation of Mishnah Kilayim 1:1; Yerushalmi Challah 1:1).

How to make a Matzah 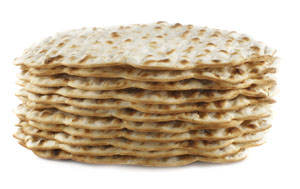 Set your oven to the highest temperature setting. Measure 1 part cold water from the faucet and 3 parts flour, and quickly mix them. Now knead the mixture into a firm ball of 1-2 inches. Roll out the dough as thin as you can, and then poke holes in the dough.

Now you should put the Matzah in the oven, and bake for about 2-3 minutes. You can also place tiles inside your oven for better results.

Remember - From the second the water touches the flour the clock starts to tick, and you only have 18 minutes until the matzah has been completely baked in the oven. If it takes longer, than it is not a Matzah.

Want to talk about Matzah?