A Yarmulke or Kippah (plural Kippot) is a thin, usually slightly rounded cloth cap worn by religious Jews on their heads. It is an ancient practice for Jews to cover their heads during prayer. Some Jews only wear a Yarmulke while praying, making blessings, or studying Jewish religious texts, but the most Orthodox Jews will not walk more than 4 cubits (2 meters) with their heads uncovered. 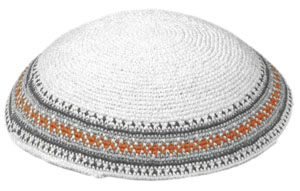 Traditionally, Kippot were worn only by men (women covered their heads more completely with scarves, hats, or wigs), but in modern times the push for equality between the sexes in the practice of Judaism has led some women to wear a Yarmulke.

The Yarmulke is the most commonly known and recognized piece of Jewish garb, but it is actually the one with the least religious significance.

Often, the color and fabric of the Kippot can be a sign of adherence to a specific religious movement.

The source for wearing a Yarmulke is found in the Talmud, where it is states "Cover your head in order that the fear of heaven may be upon you."

Want to talk about Yarmulke?