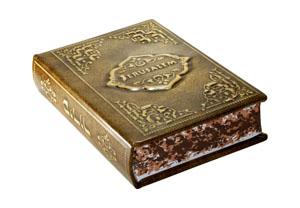 The Siddur is among the most widely-circulated and best-known of Jewish books, and is the first book a religious Jew would learn to read.

The word Siddur comes from the Hebrew root Samech-Dalet-Resh meaning "order." The Siddur, then, is a book that sets forth certain Hebrew prayers in a very specific (time-based) order. There are many types of Siddurim available, but they all share a similar underlying structure.

While the roots of Jewish prayers can be found in the Hebrew Bible, the fundamentals of the synagogue service as we know it today were initially described in the rabbinic literature of the first centuries of the common era.

The Siddur and the Mahzor were created only during the period of the Geonim, the heads of rabbinic academies in Babylonia in the early Middle Ages. Localized versions of the Siddur emerged among Jewish communities around the world.

Jewish prayer is connected with times and seasons: the time of the day, the day of the week, the ordinary day (yom khol) and the sacred day (yom tov), the ordinary seasons and the festival seasons (mo'adim), special events (such as a Brit Milah, a Bar Mitzvah or Bat Mitzvah, a Jewish Wedding, a Jewish death), and so on. The Siddur includes the blessing that are said during the events of the Jewish life cycle, and this is why the Siddur is sometimes refereed to as the Book of Life.

Observant Jews pray in formal prayer services three times a day, every day (corresponding to the sacrifices once offered at the Temple). Accordingly, a weekday Sidur will most often include Tefillat Shacharit (morning prayers), Tefillat Minchah (afternoon prayers), and Tefillat Ma'ariv (evening prayers). In each case, one prayer - the Shemoneh Esrei (also known as the Amidah) - is recited. The last prayer to be said each day is the Keri'at Shema al hamitah (the bedtime Shema).

The Shemoneh Esrei is the central prayer of all four Jewish services: Shacharit (morning), Minchah (afternoon), Ma'ariv (evening), and Musaf (additional). Sometimes called the Amidah ("standing"), the prayer is recited silently while facing the Aron Kodesh (the ark that houses the Torah scrolls).

a Sabbath Siddur is ordered in accordance with the routine of Sabbath. Since it begins in the evening, the first set of prayers concern candle lighting and welcoming the Shabbat.

Want to talk about Siddur?