The Tallit (also sometimes spelled Tallith) is a Prayer Shawl worn by Jewish men and women (Orthodox women do not wear Tallit) after they reached their Bar Mitzvah (13th Jewish Birthday) for boys or Bat Mitzvah (12th Jewish Birthday) for girls. The Tallit is used during the morning prayer, on all weekdays (including Sabbath and other holydays). It is not worn for afternoon and evening prayers.

In Ashkenazi communities it is usually only worn by married men, but there are different customs about this. 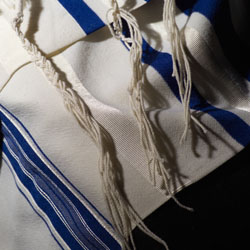 The Tallit itself is a white rectangular piece of fabric, which is usually made of wool, but sometimes is made of cotton, poliester or silk. On each of the four corners of the Tallit are special knots called Tassels (Tzitzit) in fulfillment of the biblical commandment. The purpuse of the Tallit is to hold the Tassels, so the Tallit itself has no religious meaning. The purpose of the Tzitzit (according to the Torah) is to remind us of God's commandments. Many Tallitot have blue or black stripes woven in along the shorter ends. They also commonly have an artistic motif (also called Atarah or crown) of some kind along the top long end (the part that goes against your neck). There is no particular religious significance to the Atarah, it simply shows which side of the Tallit shoudl be up.

The word Tallit originally meant "gown" or "cloak." It was a rectangular mantel that looked like a blanket and was worn by men in ancient times. Initially, the Tallit was worn as a daily habit, but after the exile of the Jews from Eretz Israel and their dispersion, they came to adopt the fashions of their gentile neighbors and the Tallit became a religious garment for prayer; hence its meaning of Prayer Shawl. 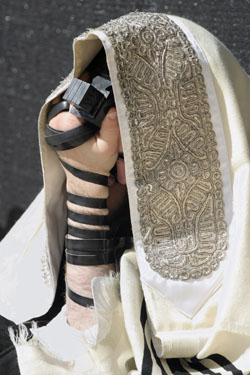 In the Bible it is said that one should insert a blue thread into each corner of the Tallit. This particular blue is known as Techailis and can only be obtained from an animal known as the Chilazon.

Since we no longer know the identity of this animal we are unable to perform this part of the mitzva of Tzitzit. Nevertheless, Tzitzit which does not contain the blue thread is perfectly valid.

Want to talk about Tallit?