The Tefillin are two small perfectly square black boxes (Batim) made of the leather of a Kosher hide, with black leather straps (Retsuot) attached to them. The straps and boxes must be dyed black with a special dye. 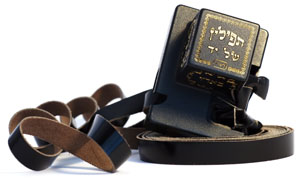 Each weekday morning (Sunday through Friday), Jewish men are required to wear Tefillin. One Tefillin Box (the "Head Tefillin") is placed upon the head, above the forehead, so as to rest upon the cerebrum. The other Tefillin box ("Hand Tefillin") is tied on the left arm so that it rests against the heart, and the suspended leather strap is wound around the left hand, and around the middle finger of that hand.

If for some reason it was impossible to wear Tefillin in the morning, one may still be put on later in the day, but not after sunset.

Tefillin are not worn on the Sabbath or on most Jewish holidays. On the fast day of Tisha Be'Av, and on that day only, they are put on during the afternoon instead of the morning service.

The English term for the Hebrew word Tefillin is "Phylacteries," although most Jews tend to use the Hebrew term (Tefillin).

Putting on Tefillin is the first Mitzvah Jewish males assume upon their Bar Mitzvah (the 13th Jewish Birthday).

The scribe inside the Tefillin 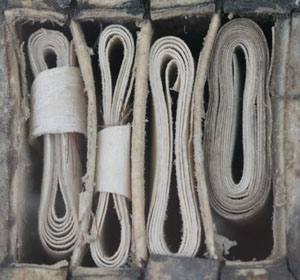 The text inserted into the two Tefillin boxes (Batim) is hand-written by a duly qualified Scribe (Sofer) on special, consecrated parchment, and consists of four sets of biblical verses (Parshiot).

The first verse in the Tefillin is the Shema verse (Deuteronomy 6:4-9), in which the Mitzvah of Tefillin is first commanded:

How to grade a tefillin

There are several parameters that dictate the grade of a Tefillin to be less or more "Mehudar" (higher quality):

Putting the Tefillin on

Translation: Praised are you, Adonai our God, Sovereign of the Universe, who has made us holy with the mitzvot and instructed us to wear tefillin.

Translation: Praised are you, Adonai our God, Sovereign of the Universe, who has made us holy with the mitzvot and instructed us concerning the precept of tefillin.

Want to talk about Tefillin?