The Tzitzit are "fringes" or "tassels" found on a Tallit worn by observant Jews. In Orthodox Judaism it is only worn by males. The Tzitzit was commanded to us by God in the Torah, where it is said that every male must wear a Tzitzit at the corners of his garments as a reminder of the bond between God and Israel.

A Tzitzit must be worn only on four cornered garments, that today are not very common (most of our shirts do not have four corners anymore). This is why Religious Adult Jewish men wear a four cornered undergarment called Tallit Katan under their cloths, so they could fulfil this important Mitzvah all day long. Adult Jewish men also wear a Tallit Gadol (a large Prayer Shawl) during morning services.

The Tzitzit on each corner is made of four strands, each of which is made of eight fine threads (known as Kaful Shemoneh). The four strands are passed through a hole (or according to some: two holes) 1-2 inches (25 to 50 mm) away from the corner of the Tallit.

There are numerous customs as to how to tie the Tzitzit. Though many methods have been proposed the one that gained the widest acceptance can be described as follows: 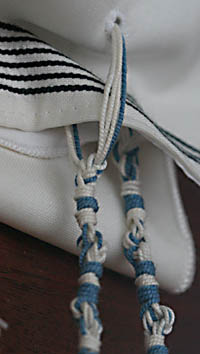 The four strands are put through the hole in the corner of the garment, thus making two sets of four threads (one set on each side of the hole). The two sets of strands are knotted together twice, and then the "shamash" (a longer strand) is wound around the remaining seven strands a number of times. The two sets are then knotted again twice. This procedure is repeated three times. A commonly formed pattern of windings is 7-8-11-13 (totalling 39 winds - the gematria of the "God is One"). Others, especially Sephardim, have 10 and 5 and 6 and 5, a combination that represents directly the spelling of the Tetragrammaton.

Want to talk about Tzitzit?