Content [ Hide ]
Why do we light the Yahrzeit candle

The meaning of the word "Yahrzeit" is the one year anniversary of the death. The Yahrzeit Candle is also called a "memorial candle", and just as the name suggests, this is a special candle or electric bulb that is lit in the commemoration of a loved one's death. 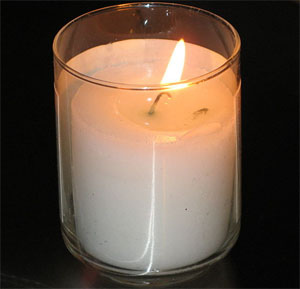 It is customary to light a Yahrzeit candle during the Shivah (a ritual in which the loved ones of the departed sit and mourn for the 7 days after the beloved passed away) at the house of the departed or at the place the mourners are sitting the Shivah, as well as on five different occasions during each year (according to the Hebrew calendar): the Yahrzeit, Yom Kippur, and the 3 pilgrimage festivals - Sukkot, Passover, Shavuot (every occasion in which the prayer of Yizkor (the Memorial service) is recited at the synagogue). This candle is traditionally lit by the parents, spouse, siblings and children of the departed both at home as well as at the grave-site, where there is a special box next to each grave that protects it from the wind.

In Israel, candles are also lit on 'Yom Hashoa Vehagvura' (Holocaust Memorial Day) and on 'Yom Hazikaron' (Memorial Day) for the soldiers that have died.

Some keep a lamp of a candle lit for the whole year (during the first year) after the passing of the departed, as well as light a candle every Friday evening before the lighting of the Sabbath candles.

Why do we light the Yahrzeit candle

The reason to light a Yahrzeit candle is spiritual. It is believed that the candle represents the soul of the departed which is never extinguished in our hearts and therefore the flame of the candle reminds us of the soul of our loved one. Just like the flame of the candle, the soul also continuously strives to reach up to G-d, and it is believed that the soul of the dead enjoys this light as it (the soul) in itself is also a light, and therefore by lighting a Yahrzeit candle we help the soul of our departed loved one to grow and elevate.

According to the Hasidic (righteous') bible, the candle represents the different levels of a Jew's relationship with G-d: The candle consists of a wick – the body and soul, oil – bible and good deeds, and fire – G-d. The soul's duty in the world is to light the candle, in other words: by living according to the bible and doing good deeds the 'wick' is elevated in the light of G-d until it becomes a part of it. The fire that is created by the lighting of this candle is also divided into 2 spheres: 'Dark light' – the light closest to the wick which symbolizes the doing of good deeds in a way that is also recognized in the reality of the doing man; and 'Light light' – the light that gives off light which symbolizes living in accordance to the bible and the doing of good deeds with genuine meaning.

The foundation of this ritual is derived from the verse "Misheli" (the Book of Proverbs, chapter 20, verse 27): "candle of G-d man's spirit". The meaning of this verse is that a lit candle symbolizes life. We light a Yahrzeit candle to commemorate the life of a departed loved one.

Some people light a special candle and others have a special electric bulb (out of safety reasons as they are uncomfortable with having a burning flame in the household for 24 hours), but the main belief is to light a special candle which burns for a little longer than 24 hours. There are also candles that burn for a whole week, but these are traditionally lit mainly during the Shiva at the mourner's home. These candles usually come in either a glass or metal casing.

When lighting a Yahrzeit candle, one should light it after dark on the evening before the anniversary of the death, only one candle needs to be lit per household. On a chag (holy festival day) or Shabbat (Saturday) the candle should be lit from an existing flame as it is forbidden to kindle a flame on these days. Some light another Yahrzeit candle the evening before, before the chag begins so that they have an existing flame from which to light the memorial candle.

As this tradition is not Halacha (law) but Masoret (tradition) there are no special prayers that must be recited while lighting a memorial candle, but some people do recite Tehilim (Psalms) to assist the soul in its journey to rejoin the light of G-d.

Want to talk about Yahrzeit Candle?