During the seder, a special platter, called a Seder Plate or a Seder Platter, is a main part of the dinner. The plate itself can be as fancy as a purchased specialty Seder Plate or as simple as a plastic plate. The Seder Plate has on it all of the main symbols of Passover.

Most seder plates have six dishes for the six symbols of the Passover seder. These are:

There is a roasted shank bone of poultry called a "Zeroa" (Which means Arm in Hebrew). The Zeroa represents God's mighty arm when he freed the jews from slavery in Egypt. The Zeroa is also symbolic of the Paschal lamb offered as the Passover sacrifice in the Jerusalem Temple.

Roast the shankbone in the oven for about 30 minutes.

The seder plate also has an hard-boiled egg called a "Beitzah" which represents the Second offerings given at the temple in Jerusalem on Passover, Shavuot, and Sukkot.

There is a green, leafy vegetable (usually celery (S.) or parsley/lettuce (A.)) called "Karpas" which reminds the participants that Passover corresponds with Spring and the harvest, which, in ancient times was a cause for celebration by itself. 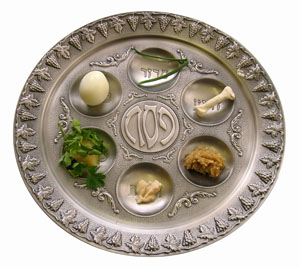 Karpas is dipped in salt water to represent tears.

The Charoset is a sweet, dark-colored, lumpy paste served during the Passover Seder. The Charoset is made of chopped apples, nuts, wine and spices, which represents the mortar with which the Israelites bonded bricks when they were enslaved in Ancient Egypt. The word Charoset comes from the Hebrew word cheres which means clay.

To make charoset, prepare 1 cup of walnuts, 1 granny smith green apple, 2 tsp. cinnamon, 2 tsp. sugar, and red wine to moisten. Chop the nuts and apples to the consistency you want (a food processor can be used). Sprinkle with spices, and moisten with wine. The texture of the charoset should remind us of mortar.

The word Maror comes from the Hebrew word Mar, which means bitter. The Seder Plate usually contains two places for Maror (bitter herbs) which represent the bitterness of slavery. The two places are called Maror and Chazeret.

Only certain specific herbs are acceptable for maror, and the most commonly used vegetables are romaine lettuce and horseradish. Other suitable vegetables include endive and dandelion, both of which are mentioned explicitly in the Mishna.

In case you decide to use horseradish and romaine lettuce, then the horserashish should be placed in the Chazeret position.

As mentioned before, Chazeret is another type of Maror. The real Chazeret is made of grated fresh horseradish. The Chazeret is eaten between two Matzot to follow the practice of Hillel, from the time when the Temple stood. He combined the Matzah and the horseradish and ate them together.

When using horseradish, one may only use freshly grated raw horseradish. No flavorings of any kind may be added. The ordinary jarred horseradish, whether red or white, is not acceptable (though many people do use those).

The authorities are divided on the requirement of chazeret, so not all communities use it.

Want to talk about Seder Plate?